That’s juicy! But is it really true?

I recently saw a very good film at the cinema: Just Mercy. It’s about a lawyer fighting to save African American prisoners from death row in Alabama. One scene particularly struck me: inmate Walter McMillan (Jamie Foxx) explained to his lawyer how people first started to gossip about the fact that he had had an affair: first people talked about him as being a cheater, then a criminal, and then a murderer. No one then, had any trouble believing that he had killed an 18 year old girl and that he deserved to be on death row. (This turned out to be a false accusation, of course…). 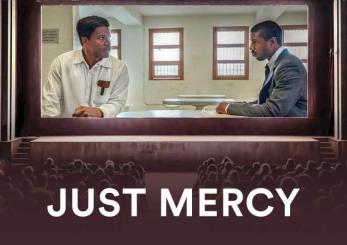 Philosopher Mladen Dolar, in a talk called “Gossip, Rumors and Philosophy” described the opening scene in Kafka’s Trial. “On page 1, the novel starts: ‘Someone must have been spreading rumours against Jospeh K. For one morning, without having done anything wrong, he was arrested.’ The story starts with a rumor, of an unspecified author, a word coming from nowhere… The rumor, the slander that started it all is mentioned only once in the first sentence. There are no other clues as to who this someone might have been. No clues during the trial. The whole novel is presented from the view of Jospeh K. Only this first sentence is written in the 3rd person, from the point of view of an objective narrator, who also affirms that Jospeh K. has done no wrong. In the end, Jospeh K. was slaughtered with a knife, like a dog. He was killed because of something that started out as a mere rumor.”

Although these examples may seem extreme, they illustrate just how damaging (and false) such rumors can be. Similarly, in the work place, certain rumors could easily destroy someone’s reputation. So, when we hear a juicy story at the coffee machine, how do we even know whether it is true or not? 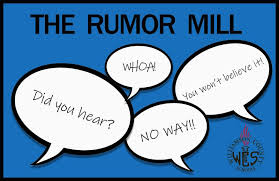 To start with, are we listening to rumors or gossip? While the media and certain scholars tend to use the terms interchangeably, there actually is a big difference between the two. Rumors are generally speculative, and unsubstantiated talk1. Gossip, on the other hand, is considered to be more accurate, as the core message generally remains intact as it is being transmitted.

If, for example, I observe that Jack, one of my colleagues, is flirting with a waitress at the pub, and I tell this to one of my friends the next day, I would be gossiping. Most likely, my account of what happened is fairly accurate. I’ve seen it first hand, and although I could exaggerate Jack’s flirting and make it sound like he was having a full blown affair, most likely, my account would still be fairly close to the truth. However, if my friend Anne, then, tells this story to other people, she would be spreading rumors, as she didn’t actually see Jack’s flirting with her own eyes. The likelihood that she could exaggerate my story, add her own interpretations and twists to it, would be a lot stronger.

Therefore, gossipers usually give a lot of first hand testimony: what happened to them, what they saw, what they heard. No first-hand account of an event is ever a rumor, although it may later turn into one.

One of my journalism students interviewed Laura (not her real name), 55, who is the head of an internal training department at a large medical simulation company in Switzerland: “When our CEO had a ski accident, the information was not communicated very well. So, rumors went from him having had a head injury, then, that he was sitting in a wheelchair and that he had open fractures. The whole company was afraid that he wouldn’t be able to continue working.”

Credibility of Gossip and Rumours

While scholars generally agree that rumors are untrue, several wonder just how reliable gossip is. One study2 claims that the reliability of gossip is linked to two factors: deterrence and transmission. If a gossiper were to spread false information, he could potentially be punished by the receiver, or at least perceived in a very negative manner. This is deterrence.

To come back to Laura, after her CEO had the ski accident, one of her colleagues tried to use the rumors to his advantage. “At that time,” Laura recalled, “we had a VP Sales that used all of these rumors to strengthen his position and weaken all others. … He would tell us that our CEO is so weak that he had to take over certain of the CEO’s tasks.” This VP Sales eventually got fired when all of this came to light. This type of social punishment generally dissuades people to spread false rumors.

Transmission may explain why people still engage in spreading rumors, even when so much is at stake. Rumor-mongers are able to use language in an effective way to avoid taking responsibility for what they are saying, and in this way, protect themselves. People can easily hide behind expressions like ‘I have been told that…,’ ‘I have heard…’ ‘People say… ,’ ‘According to my source who shall remain nameless…,’ which allows them to transmit the information and maintain their social bonds, without suffering from any of the consequences.

Gossip usually has an author who can be held accountable for what (s)he is saying. Rumor doesn’t.

What also makes rumors particularly dangerous, is that once one circulates about someone (even if it’s later proven untrue), the damage is done. Take the example of Jack flirting with the waitress: a rumor, after some time, could have it that he is having a real affair or that he was sexually harassing the waitress, which, of course, could wreak havoc on his personal and professional life. As Dolar points out, even when they are unfounded, “rumors always leave a stain. And the stain is nearly impossible to erase.” People will always believe that there must have been some truth to these allegations… Il n’y a pas de fumée sans feu, as we say in French. (There is no smoke without a fire).

There’s a great scene in the film Doubt. Philip Seymour Hoffman plays Father Flynn, who gives a sermon about the evils of gossip (actually, about rumors, according to our definition). He talks about a woman who asks for God’s forgiveness after having spread rumors.

“The priest told her: ‘I want you to go home, take a pillow up on your roof, cut it open with a knife, and return here to me. So the woman went home, took a pillow off her bed, a knife from the drawer, went up the fire escape to her roof, and stabbed the pillow. And then she went back to the old parish priest as instructed. ‘Did you gut the pillow with a knife?’ he says.

-And what was the result?

-Feathers, she said. [Feathers are shown flying everywhere, all over the alley].

-Feathers, he repeated. Now I want you to go back and gather every last feather that flew out in the wind.

-Well, she said. It can’t be done. I don’t know where they went. The wind took them all over.

-And that, said the priest, is gossip.

(Actually, that is rumor!).

So next time someone is sharing something juicy with you at work, don’t forget to ask who the author is – especially if you consider sharing it with someone else.