The walls have ears! But wait -which walls?

Lately, I can’t help notice the men who took over the office next to me at work. Rumor has it that they’re here to change our office space to a flexible work space. No more walls: just one large space with thirty or so work stations. In this way, rather than hiding in our small office rooms, we’ll be forced to talk to all of our colleagues, share ideas and experiences, and that will supposedly lead to innovative projects, better collaboration and state of the art didactics. I wonder: will such a flex space be conducive to more interesting gossip as well? 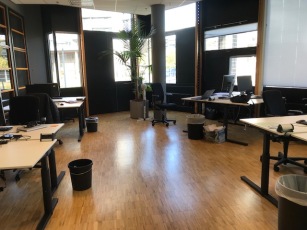 Bernadette Nooij, from Facility Management at The Hague University of Applied Sciences, is doing research for her PhD on the effects such flex spaces have on employees. “These types of offices tend to kill gossip altogether,” she tells me. “Paradoxically, even though we see our colleagues more often, we have less opportunity to have meaningful talks and to gossip. In the past, we used to visit each other in our offices and talk freely. Now that we have this new open space, colleagues are always looking over their shoulders before sharing something.” And if there are too many people around (which tends to be the case), employees just refrain from talking altogether.

“Not having walls anymore,” Bernadette claims, “means that the work space is not safe. Rather, it’s a space where you need to be constantly on your guard. It’s an office that does not allow employees to have substantive conversations with each other. This weakens an organizational culture considerably.”

Students from the minor Journalism and Media at The Hague University of Applied Sciences asked a variety of people working in different organizations in which type of setting they would most likely engage in gossip.

Jean-Paul*, a veterinary doctor working in Brittany, France, explains: “In my clinic, I tend to go from room to room. I’m always moving around and facing different people. So of course, there’s always a moment where you start talking about others. That wouldn’t happen if we were in an open space.”

“I used to work in a flex office,” says Gert*, an employee of an energy company in The Netherlands. “This is one of the worst inventions ever. You can’t concentrate because people are constantly talking about all sorts of things such as football and cars –but rarely about work.” And rarely about anything juicy either.

Janet* works in a large educational institution in The Netherlands : “We used to have a strong family culture in our department. But now that we went to a flex office space, people tend to work more from home. There’s a lot of absence: the colleagues come in to do their thing, and then they’re gone. So the connection we once had [when we had small offices], dissolved over time. We have a totally different type of work culture now.” Even though there are small rooms in Janet’s department that are designed for employees to conduct private meetings, they are rarely used to share gossip. “Gossip doesn’t work that way. It needs to happen spontaneously. You don’t book a room to gossip with a colleague!”

According to one study1, even though we are working in a more and more “digital, loose, informal, flexible and mobile” environment, the conventional office space still remains the most popular. The majority of employees like flexibility and enjoy working from home occasionally. However, they have a strong need to stay connected to their colleagues, “to share gossip and exchange tacit knowledge.” 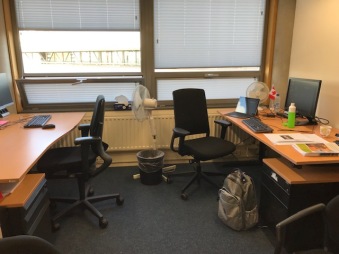 According to a Harvard Business Review study, firms that switched to open offices, saw their employees’ face to face interactions fall by 70%. People sitting in such offices were quick to build an invisible wall around themselves, which 18th century philosopher Denis Diderot called the ‘fourth wall.’ “It prevents actors from being distracted by the audience and allows them to divorce themselves from what they cannot control (the audience) and focus only on what they can (the scene).” The authors claim that in open offices, fourth-wall norms spread quickly. “If someone is working intently, people don’t interrupt her. If someone starts a conversation and a colleague shoots him a look of annoyance, he won’t do it again.” However, fourth walls are not strong enough to invite gossip in…

So why do organisations insist on creating such office spaces, when evidence shows that they impede collaboration and team building? Cutting costs is the obvious answer. But what if there was a deeper reason?

According to research2 managers tend to feel threatened when their employees gossip, and most will do anything they can to get rid of it. Could that be another incentive for management to break down the walls and create an open office space? If I look at my own department, for example, the traditional gossip hot spots have all come under siege over time: students were recently given access to the staff-only washroom. The teachers’ room was stripped of its coffee machine and kitchen…

In a last ditch effort to keep on gossiping at work, I recommend following the smokers on their cigarette breaks, like Rachel in Friends did when she started a new job. She quickly found out that it was during those breaks that she learned the most about the organization, and gained access to important information.

*Names have been changed in order to preserve anonymity.