A question that keeps coming up is whether I should  completely avoid the word gossip when interviewing people and talking about my research. As Jacco van Uden points out in his reaction to my last blog: “Het woord roddel heeft zoveel negatieve connotaties dat het je blijkbaar in de weg zit als je er onderzoek naar wilt doen.” (The word has so many negative connotations that it will probably get in the way if you want to research it). But if I choose to avoid the word, am I really researching what I want to be researching, he asks? 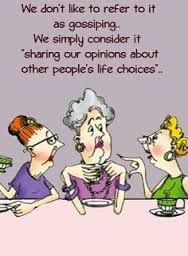 However, this is not the definition that comes to most people’s minds when they hear the word gossip; but rather, Joseph Epstein’s (2011): “telling things about other people that they would rather not have known.” There’s a sense of secrecy, betrayal, and as Epstein puts it: “listening to gossip can be likened to receiving stolen goods.” No wonder not many people like to admit doing it.

But when using the broad, academic definition of gossip, are you really doing research on gossip (or at least on what seems to be most people’s understanding of the word)? I wonder why so many researchers use a word that actually has another meaning (to most people)?

A few days ago, our research group hosted a small reception for our faculty. We each gave small introductions about our research topics. Without thinking twice about it, I stressed the fact that my research was about gossip in organizations. (Not even for a micro second, did I consider using another term or the definition only). “That’s why my direct colleagues avoid me,” I joke. “Especially if I happen to have a notebook in my hand.”

Many colleagues came to me during the drinks, asking questions and giving their points of view about my research. Rather than avoiding me, some even felt compelled to share juicy bits of gossip with me. I wonder if they would have spoken to me as freely if I had told them I was doing research on informal communication? To answer Jacco’s question: what is the trade-off of using or not using the word gossip?

Gossip seems to be a sexy research topic.